As a young teenager, my frequent immersions into the world of fiction meant that I enjoyed the rather tawdry and sensational novels in the genre of Gothic romances. House of Many Shadows fits into this category quite nicely, and innocent, doe-eyed readers will find it a gentle introduction to what can be an occasionally violent and sexually-charged genre. 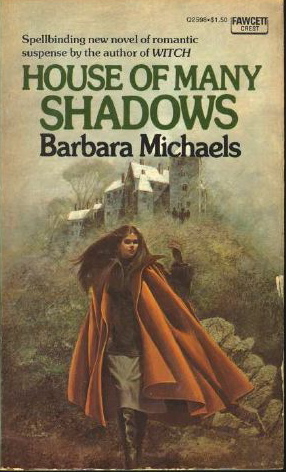 Barbara Michaels is a pseudonym for Barbara Mertz (recently decreased), an Egyptologist who used alternative names to separate her academic work from her activity as an author. Her other well-known pen name was Elizabeth Peters – under this latter name, Barbara created several memorable heroines including the late-Victorian Egyptologist Amelia Peabody, art-historian Vicky Bliss, and librarian Jacqueline Kirby (Pornokitsch, February 2011). In the guise of Barbara Michaels, Mertz created stand-alone story lines with strong, feminist lead characters who generally fall in love (unwillingly) with acerbic and reticent men.

In agreement with other online bloggers, I found House of Many Shadows to be one of Barbara Michael’s less enjoyable works. I was surprised to find myself critical of her conservative and outdated characterization of the ‘villains’ (a ne’r-do-well artist and his stupid and vicious girlfriend) and not overly stimulated by the atmosphere of the setting. Assuredly, some of her other works – e.g. The Master of Blacktower, Be Buried in the Rain, The Dancing Floor, etc. – are much better.

Reading the work of Barbara Mertz always left with me some kind of impression, and I recall all of her works with great fondness. It may seem a bit odd, but reading them as a young adult left me with the memory of another world – and bits and pieces of those worlds return to me in adulthood like a familiar smell or scene. I highly recommend her novels to people of all different ages.