Perhaps, for the younger generation of readers, this classic novel will be set aside in favor of more recently popular stories – particularly The Hunger Games. I read Lord of the Flies for the first time in high school, wrote some meaningless paper on it, and have since returned to it again and again for that little thrill I feel when Simon lies prostate and dreaming before the severed pig head. It seems that many other authors agree with me, as The Hunger Games author Suzanne Collins lists it as one of her favorite books (as does Stephen King). 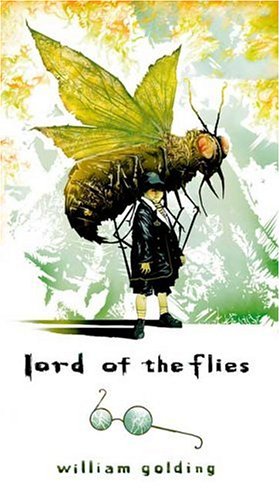 The story is an allegory, or tale with a moral, which highlights themes ranging from psychological struggle, to human nature, to war (Shmoop, 2014). Set in the midst of a wartime evacuation, with allusions to an unspecified nuclear war, the tale follows a group of young, pre-adolescent boys who split into factions based on their similarities and differences (Wikipedia article, 2014).

There are many dark and surreal scenes in this novel (particularly the discovery of the dead fighter pilot, the death of Simon, and the theft of Piggy’s glasses), which translate into reasonably good cinematic moments. You can see the 1990 version of The Lord of the Flies for free on Youtube:

You might ask what the title of the novel refers to – and there are, again, a variety of available interpretations. Literally, Lord of the Flies refers to the Devil, aka. Beelzebub, aka. “lord of the (heavenly) dwelling” (Wikipedia article, 2014). It also illustrates the shift from an innocent, loving being to a controlling, malevolent one – which is embodied in the head of the sow (Wikipedia article, 2014).